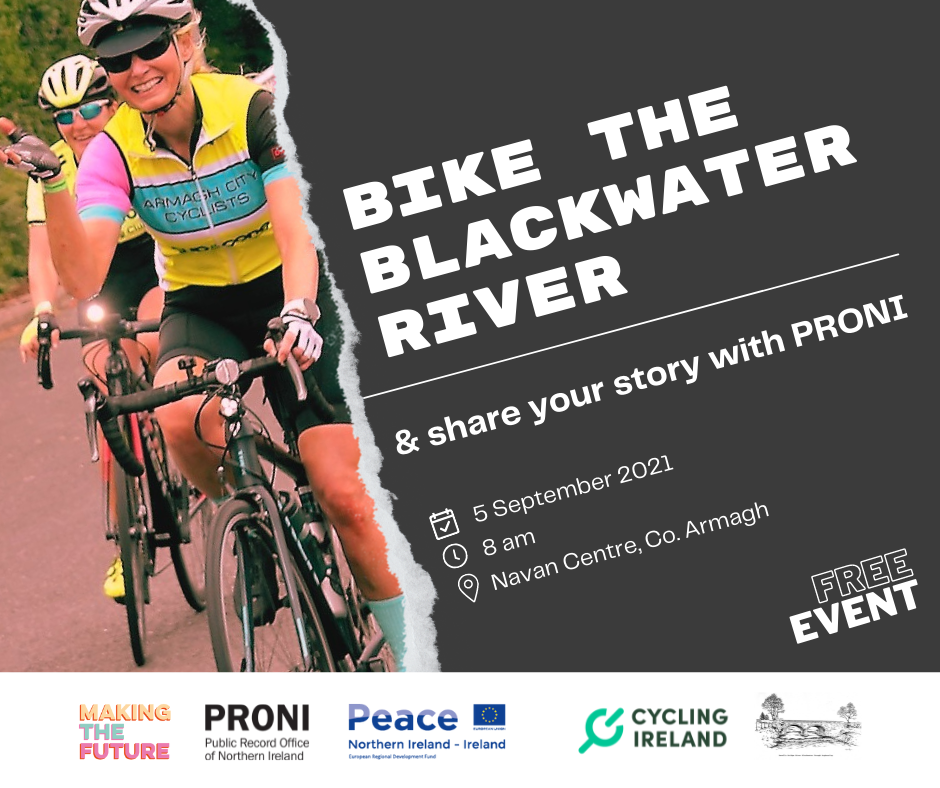 Sorry, this event is no longer for sale.

This cycle takes place on the 5th September 2021

Your message will be send directly to the event organizer.
*Contact Reason:
Order ID:
This can be found in your confirmation email and on your ticket.
*Your Full Name:
*Your Email Address:
Your Message (no more than 2000 characters)
Characters: 0/2000
Event Description:

Making The Future, Truagh Development Association and Cycling Ireland are coming together for this exciting and free Cycling & Storytelling Project.

“Bike The Blackwater” will bring cyclists from Armagh City Cyclists, Portadown Cycling Club, Emyvale and Killylough Cycling Clubs together to cycle the Blackwater River route and share the history and heritage of the area and some cycling stories.

The Blackwater River Valley area is a beautiful and undiscovered part of Ireland.  The catchment of the river Blackwater meanders through glorious countryside and under countless bridges linking the border counties of Monaghan, Armagh, Fermanagh and Tyrone, ultimately flowing into Lough Neagh.

Starting at the Navan Centre, Armagh, the two cycling routes have been designed to showcase the beauty and history of the Blackwater River Valley: past stone cottages, medieval churches and graveyards, historic buildings and rolling green hills.

Route 1: 120km distance - Starting from the Navan Centre in Armagh, the cyclists head out along the Battleford Road towards its junction with the Eglish Road.  Having crossed the Blackwater & into Co. Tyrone, they then take the Regahy Road to Aughnacloy.  Rehaghy is the first test for the cyclists but is well within the capabilities of anyone when taken at a steady pace.  Following the short descent into Aughnacloy there will be a water stop to refuel and regroup.  Out of town the cyclists turn left on the Favour Royal Road towards Augher.  A rolling stretch of road, it twists and turns following the path of the River Blackwater.  Out of Augher the riders head slightly uphill and then swing left towards the source of the river.  After turning left onto Murley Road the cyclists will pass within a few hundred meters of the source.  The on to Fivemiletown for a second water stop, and a little more climbing to Slieve Beagh.  Crossing into Co. Monaghan the cyclists will head for Emyvale and Glaslough, before the short run into Caledon.  Leaving the village, the cyclists cross the river for the second time.  Then it’s the final push up to Killylea and a speedy descent back to the finish at the Navan Centre for refreshments and a catch up with fellow cyclists. See route here.

Route 2: 60 km distance - Also starting from the Navan Centre in Armagh this route, although shorter, offers the cyclists a couple of good tests along the way.  Out along the Battleford Road to cross the Blackwater for the first time, into Tyrone and over the Rehaghy Road.  This is the first test, but taken at one’s own pace it is an enjoyable challenge to get the blood & sweat flowing.  Down the descent to a well-earned water stop at Aughnacloy.  After replenishment of fluids and spirit the riders cross into Monaghan and head along the N2 to Emyvale.  Turning left they then make for Glaslough.  Turning left the cyclists enter Tyrone and make their way to Caledon.  Once out of the village the cyclists will cross the river for the second time.  The final quarter of the cycle will involve the push up to Killylea to be followed by the rapid descent towards the finish at the Navan Centre in Armagh.  There the cyclists can enjoy refreshments and regale each other with tales from the cycle and take satisfaction from a very enjoyable Bike the Blackwater with friends, both old and new.  See Route here